get to know our team 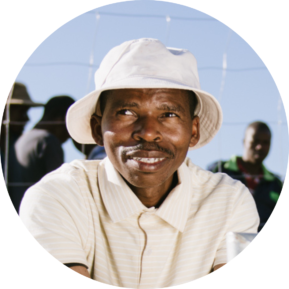 Sibusiso Shiba is one of the kindest & joyous people you will ever meet. Seriously. Sibu's love for life is infectious and we're so lucky to have him on our team. Sibu oversees and leads all of our operations in the Kingdom of eSwatini! Besides breaking into song on long car rides and saying "It's Nice to Be Here" wherever he is at in the world, Sibu loves spending time with his family.

Sibu is also probably the most impressive person on our team. He holds a Bachelor Degree in Adult Education with Majors in Rural Development from the University of Swaziland (UNISWA). He also holds an Advanced Diploma in Project Management from the Institute of Commercial Management (ICM) in the UK. On top of this, Sibu also holds a PRINCE2 Foundation certificate, a Diploma and Certificate in Adult Education and a Chartered Business Administrator Certificate from Chartered Association of Business Administrators in Canada. (As if that weren’t enough, Sibu also has a certificate in Portuguese!)

Before coming to lead The Thirst Project in eSwatini, Sibu served in the Ministry of Natural Resources and Energy, Department of Water Affairs, Rural Water Supply for 11 years as an Assistant Community Development Officer, and then a Senior Water Development Analyst. In both positions he was in charge of community training on water supply and sanitation systems.

Catch him at our annual Thirst Gala or take a trip with us to Eswatini and you'll see for yourself why Sibu is one of kind! 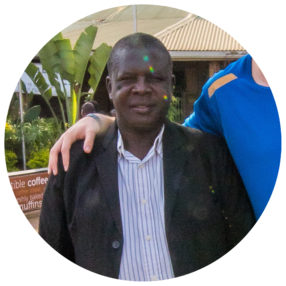 Vincent oversees and leads all of our operations in Uganda! Prior to his post with Thirst Project, Vincent has been building clean water projects since 1993 through J.O.Y. Drilling in Uganda. Vincent believes that in addition to providing clean water we are also creating community mobilization which will help address any problem Uganda faces. Under his leadership, J.O.Y. Drilling acquired multiple drilling rigs which helps reduce the cost of W.A.S.H. projects for countless stakeholders! 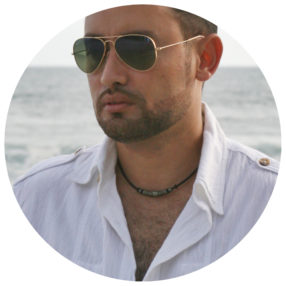 Luis oversees and leads all of our operations in El Salvador! Prior to his time work with Thirst Project, Luis worked in community development in his country through Gente Ayudando Gente. The only thing Luis loves more than relaxing on the beaches of La Libertad is waking up everyday and working with Community & School leaders to provide access to clean water across the country. If you're ever lucky enough to visit, Luis is sure to provide an authentic "taste" of El Salvador! 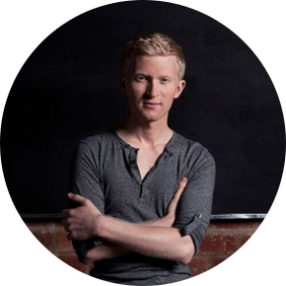 Seth is obsessed with sharks! He has cage dived with Great Whites eight times!

“It's kind of fun to do the impossible.” - Walt Disney

Seth was raised in Indianapolis, Indiana and grew up with a love of sharks and being on stage. Seth started acting at the age of seven and moved out to California to earn a B.A. in Acting at the American Academy of Dramatic Arts- LA. Although all paths lead to acting, Seth’s direction changed completely when one of his friends educated him about the global water crisis. Motivated to take action, Seth gathered seven of his closest college friends together, purchased over 1,000 water bottles, and went to the streets to spread awareness about the global water crisis. After partnering with thousands of schools and millions of students, the Thirst Project has raised millions of dollars to build water, sanitation and hygiene projects in 13 countries bringing safe, clean water to more than half a million people for life! Seth has spoken internationally at over 300 schools, countless churches, and numerous conferences including TEDx Hollywood Youth Conference, the NEXUS Global Youth Summit, addressing the United Nations General Assembly, and meeting with Obama Administration Officials at the White House. For all of this work and more, Seth has been named to Forbes 30 under 30, honored with the VH1 DoSomething Award, and even rang the opening NASDAQ bell on Wall Street. 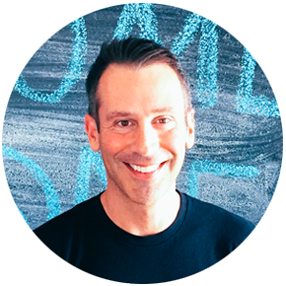 "I have decided to stick with love. Hate is too great a burden to bear." -MLK

Although Devon is originally from Seattle, he's basically a born and raised Angeleno, knowing every person and part of the city like the back of his hand. Devon guarantees a good laugh and to keep the office (let's be real and Seth) in check. He's in charge of special projects, which basically makes him sound like a badass secret agent (not too far from the truth). Devon plays an integral role in expanding the organization and getting Thirst Project in front of the right people. He keeps us anchored, working alongside every team member to accomplish our big goal of giving the entire Kingdom of eSwatini access to safe, clean drinking water. You can butter Devon up with a good toasted PB&J or an outing at Universal Studios. 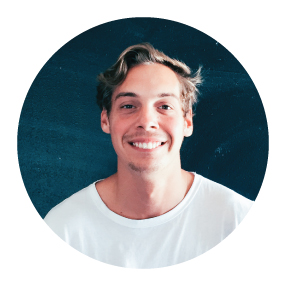 Evan sleds down hills on blocks of ice. For fun.

“Nothing is impossible. The word itself says IMPossible. Always. ALLWays.”

Just because he’s the tallest, doesn’t mean he’s all grown up. Evan is our resident big kid and hype master, so you can always bank on him having the energy of a golden retriever puppy. If you’ve ever heard Evan give a Thirst Project presentation, you’ll know why we’ve got him educating all of you about Thirst Project and how you can help end the global water crisis. If you want to get involved, start a campaign, or fundraiser for clean water, call Evan, because he needs more friends. Evan bleeds blue with deep roots in Kentucky, which is why he loves to chase sunsets, fireflies, and apple pie. After graduating from the University of Kentucky with a degree in Environmental Science with a focus in water resources, Evan decided to ditch his degree and become a ziplining guide. When this adrenaline junkie put down the ropes, he hit the road with Thirst Project as a Road Warrior. Evan fell in love with the road life and the students of Thirst Project, leading him to work for Thirst Project full-time and calling LA home. What does Cody Simpson, jorts, Our Lips Are Sealed, and Disney have all in common? Evan is obsessed with all (shocker). 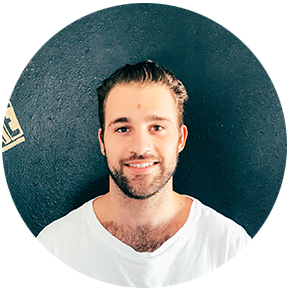 At one point, Luke had 11 living grandparents.

"You can't go anywhere before you've been somewhere."

Luke is the jack of all trades here at Thirst Project. He’s the biz dev connect, the behind the scenes go-to guy for events and parties for clean water, and manager for all things marketing. Luke is one of our most seasoned staffers. He’s worked part-time for Thirst Project for the past 6 years and has (finally) moved out to LA, making this place a little bit more sunny (yeah, it’s possible). Luke hails from Lebanon, Ohio. He graduated from Denison University (Go Big Red!) with a degree in Communications and Environmental Studies. After hours, he dabbles in graphic design and hip-hop. Win Luke’s love over with a nice cup of black coffee and bow down to his 2016 Wooden Citizenship Cup (awarded to the best role model in college sports). We all want to grow up to be like Luke. 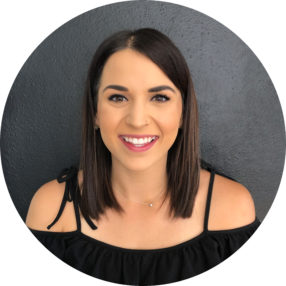 Emily is notorious for getting in heated debates about which breakfast food is best. (hint: it's pancakes)

"No one achieves anything alone." - Leslie Knope

Emily joins Thirst Project from the streets of Santa Clarita where she was busy fighting for human rights at the young age of 15. After majoring in Health Promotion & Disease Prevention (with a Pre-Med concentration) from the University of Southern California, she served as a camp counselor and became an event planner on the side. Talk about a humble, hustler! When Emily isn't busy fighting the global water crisis, she's at home watching re-runs of The Office with her cat, Finn and waiting for football season to begin. If you need any help with booking a School Tour presentation or perfecting your chocolate chip cookie recipe, give Emily a ring! 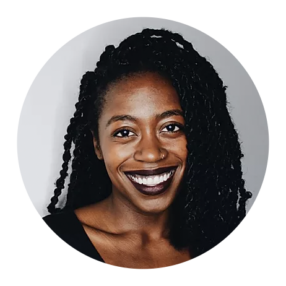 Shaelle joins Thirst Project after quite an adventurous journey around the world! She was born in Haiti, raised in Hartford, CT, studied at UCONN & in Argentina and has visited five other countries along the way. She holds a degree in Political Science with minors in French & Human Rights. If you really want to get on Shaelle's good side you'll bring her food, practice Yoga with her or play with her socially awkward puppy Flash. Her favorite part about being apart of Thirst Project is working alongside Luke, so you can tell Shaelle is still very new here! Shaelle is inspired by those who strive to make a positive impact in their community like Elon Musk, Kanye West & Yagazie Emezi, which makes her the perfect fit to be the mouthpiece of our organization. Slide in our DM's if you want to know more. 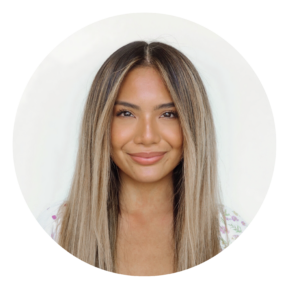 I graduated college in 3 years.

“If you can’t feed a hundred people, then feed just one.” - Mother Teresa

Introducing our first ever former Power of Youth award winner to join our team, Kristen de Guzman has been a force to be reckoned with since joining Thirst Project at the age of 17. After coordinating a School Club that raised enough money to fully fund a clean water well in the Kingdom of eSwatini, Kristen had the privilege of traveling with our team to build the well and be featured in our School Tour documentary that is played at schools we work with across the nation. Kristen went on to college and earned a degree in Business Administration, so it only made sense that she returned back to Thirst Project to join our Biz Dev team after graduating. Inspired by young people, Kristen knows that she belongs to the loudest, most active, and creative generation history has ever seen — this is one of her favorite aspects of working with Thirst Project. If Kristen isn't drinking way too much caffeine and oversharing information around just about anything, she is busy developing new relationships with partners, cooking up life-changing ideas, and highlighting the amazing work of our young people. 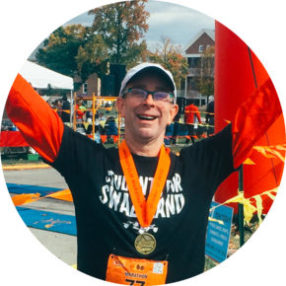 Damon once hiked 30 miles in a single day at Yosemite National Park!

"I know in my heart that man is good, that what is right will always eventually triumph and there is purpose and worth to each and every life." -Ronald Reagan

Damon may be a grandpa of four and our only team member with an AARP card, but he is more than just his 10% Waffle House discount! Damon has run 11 marathons, swam with sharks, and taught more than 75,000 show choir students in his 38-year choreography career! Damon graduated from Ball State University and grew up a fan of Indianapolis Colts & Cincinnati Reds. Damon is also humbled to be our Outreach Coordinator and creator of Show Choir's For Thirst, bringing in support from churches, philanthropists, school music programs, any anyone else wanting to join our army of world changers. If you really want to win Damon over, you can take him to one of the few Broadway shows he hasn't seen and help him add to his collection of 80 playbills already lying around his house.